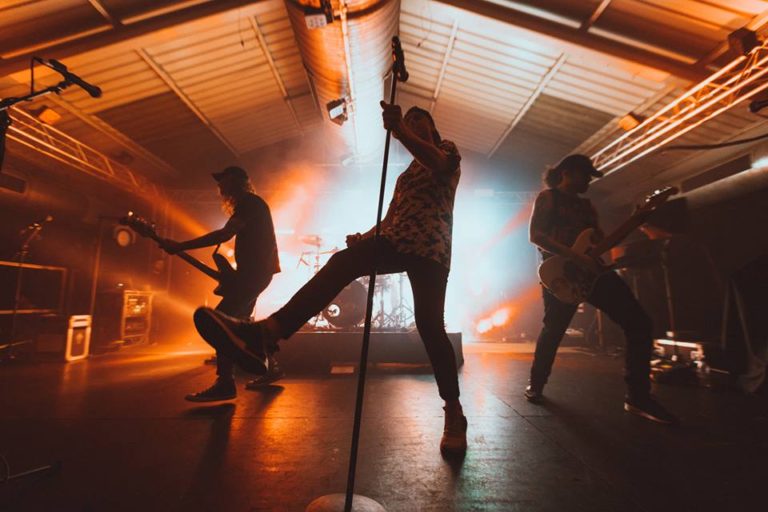 Interview with Derek of State Champs, ‘I’m always trying to see what the newest best sounding album is.’

I saw you checked out Wednesday’s student night Rebellion at The Frog and Frigate. What did you think of it?

That was fun, that was cool. It was good that we had a day early here to just get settled in here to the UK before the first show of the UK leg. I met a lot of cool people, we already have some friends out here that got to take us out. Our friends in the band Creeper took us out to that bar and we had a wild night, it was fun. Maybe a little too much fun before the first show, so now we’re all like eughhhh.

Our friends in the band Creeper took us out to that bar and we had a wild night, it was fun. 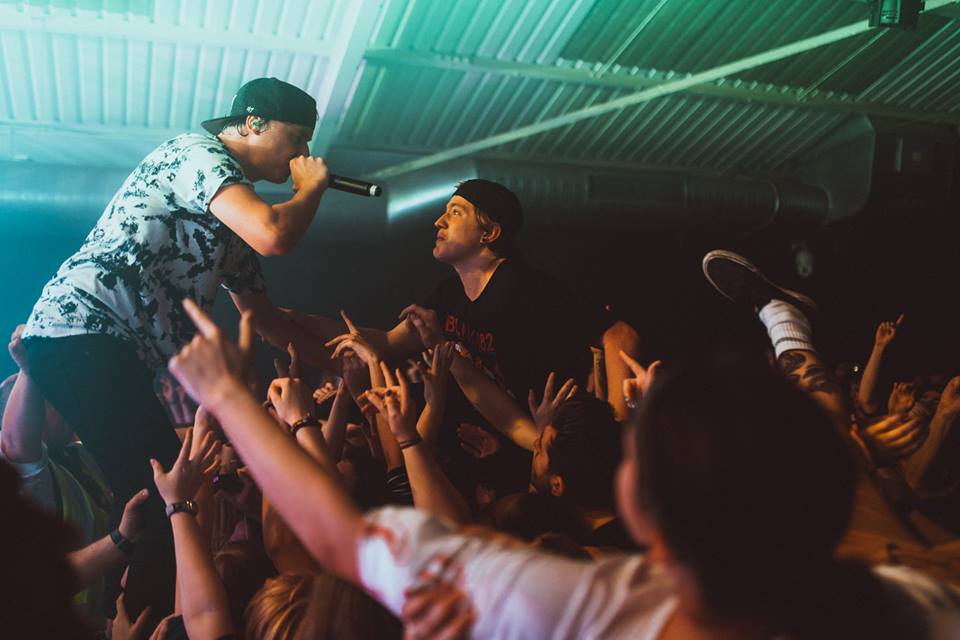 You’ve been touring relentlessly for your latest release, Around The World And Back, what do you do on the odd days you get off?

We’re super touristy. We love being the cheesy sight-seeing guys and doing all the famous things and going to local spots. We’ll never stop going to the Eiffel Tower and to London to see the London Eye and Big Ben. We’re big food people too, we go to all the local food spots and we just like to explore. We like to do a lot of shopping, spend a little too much money. I was over at the casino last night next door, my luck was not on par so that was not good either, but it’s all in good fun, so that’s what we like to do.

We love being the cheesy sight-seeing guys..

You’re quite active on social media – always sharing snippets from your days on tour and photos from the shows. Do you think this online presence is important for fans to connect with you?

It’s the biggest thing ever for connecting to fans right now. Without Twitter, Facebook, Instagram, even Snapchat, we wouldn’t be where we are today. It’s really cool to just engage like that, have everyone be able to be that close to you and connect with you that easily. I know I couldn’t do that with my favourite bands when I was younger, but it’s a lot easier now and it can only help bands I think, as long you use the platform wisely. 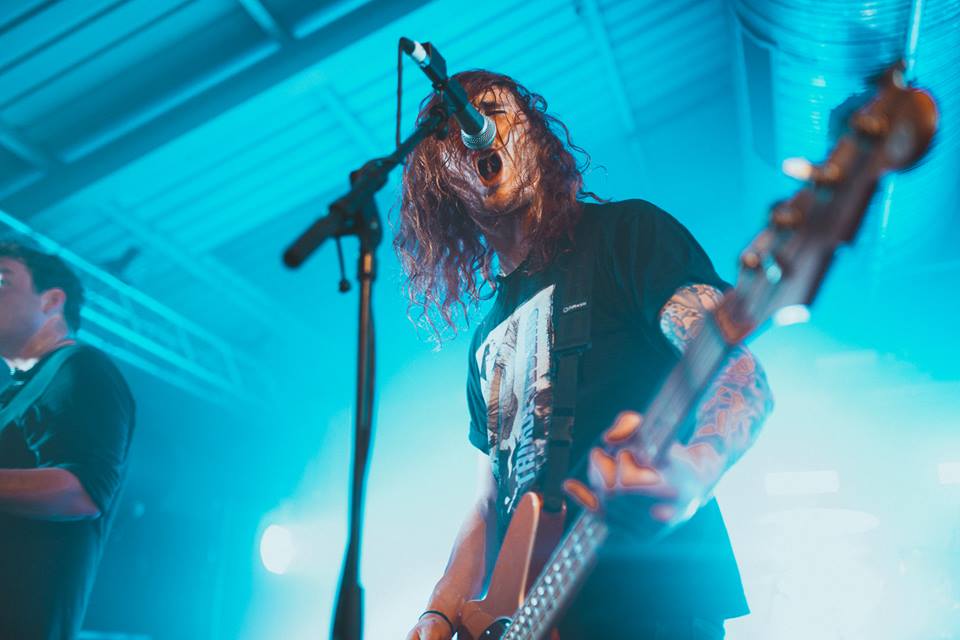 What’s one of your favourite songs to play live?

This tour we’ve been opening our set with ‘Losing Myself’, I think it’s a big one for me, it’s one of my favourites on the record. It goes over pretty well with the crowd since it’s a faster one and gets everybody moving. It hits home for me out of all of the songs on the album.

You’ve toured with some brilliant bands. From 5 Seconds of Summer to All Time Low, and on this tour with As It Is and Northbound. What’s your favourite thing about touring with other bands?

The different kind of people that you wouldn’t expect to maybe make a relationship or a connection with, let alone become such good friends. Like the guys in 5 Seconds of Summer, we never even thought we would be associated with them, let alone tour with them. We met kind of by mistake and became best friends instantly because they’re just four normal young dudes like us trying to have a good time, play music and have a dream. Sure enough, it happened for them very quickly and put them on this level that’s insane to a lot of people. They’re still very normal and it’s cool to hear everybody else’s story and be able to connect on a social level that well, like normal dudes because they don’t get to do that as much as we do.

We never even thought we would be associated with them [5 Seconds of Summer].. 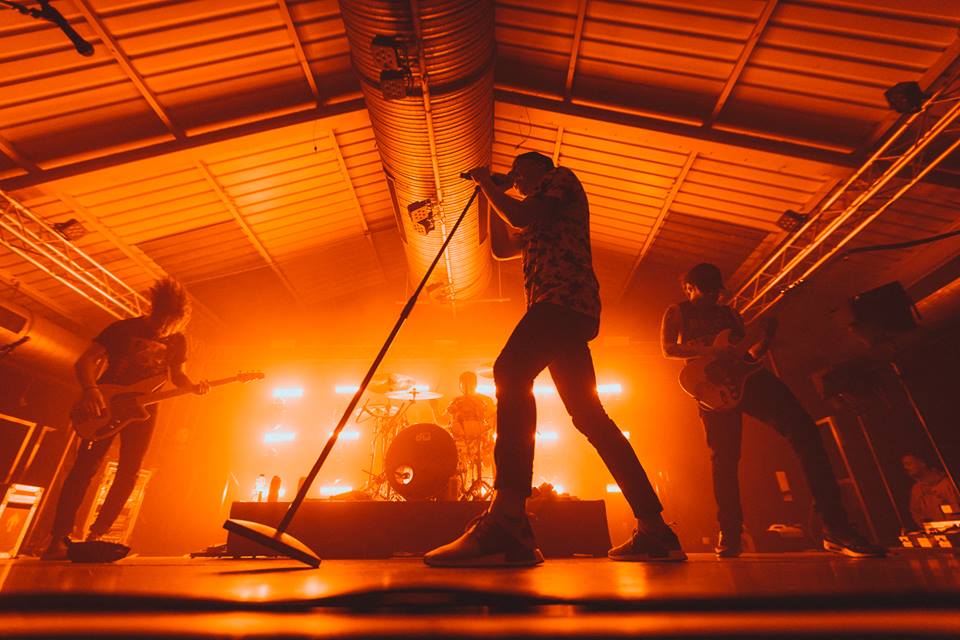 If you could tour with anyone, who would it be?

I really want to tour with Paramore, I think that would be sick. We’ve toured with a lot of my favourite bands, and have been fortunate to do the tours with New Found Glory and All Time Low and Cartel. Paramore would be a bucket list check off, along with Fall Out Boy, Blink-182. Those are the big three I think. Even Panic! At The Disco would be cool.

What’s the most rewarding thing about touring?

When we come around to a certain city for a second or third, fourth time, I keep seeing more people come and we still have those faces that I saw at the show before. People go on this journey with us, they always keep supporting and come back to us, and they bring more friends next time, and they will bring their friends next time. We love going out after the shows and seeing fans and making friends with everyone, meeting new people. To see that grow and grow each time, and get better and better each time we come back, that’s really rewarding, it’s the best feeling I think.

People go on this journey with us, they always keep supporting and come back to us.

What’s the most challenging?

I guess being homesick, which we get easily sometimes. I’m an only child with a single mom, so I’m a huge momma’s boy, I miss my mom too much. I know that’s cheesy and cute, a very ‘awe’ moment, but it’s really tough. We’re lucky to have very supportive families, friends and relationships. We get to do what we do. Communication is a huge thing, staying in touch with loved ones, peers and friends at home.

I have to send my mom pictures on pictures every day, I have to call her at least every couple of days otherwise she gets pissed off at me and I’m grounded, except not really. It’s very typical, but you’d be surprised at how it can get to you here and there, but you have to remind yourself why you’re doing what you do, and make sure that everyone is supporting you because that can only make it easier.

I have to send my mom pictures on pictures every day.. 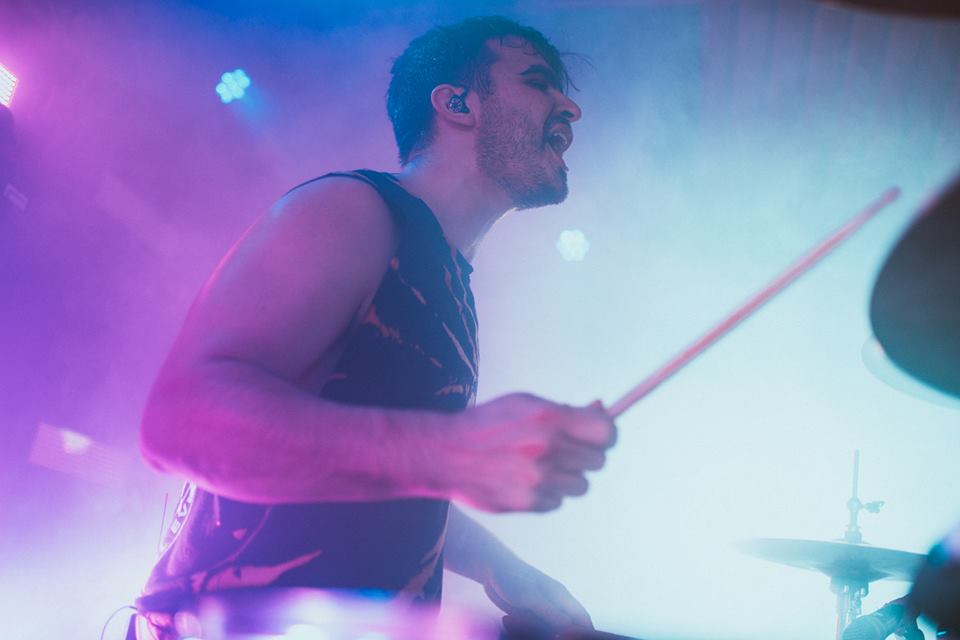 If you could go back in time and release someone’s song or album as your own, what would it be and why?

Has your inspiration changed over the 7 years you have been a band?

A little bit. You find inspiration in things along the way. First we were inspired just by our favourite bands and going to local shows. Seeing the popular bands in our mini scene at home in Albany, New York do well, that made us want to start a band. Then you see success in the bands that you tour with, you see how they work and how they work behind the scenes, see how humble they are.

You find inspiration in things along the way.

A band like All Time Low for example, when they took us on the first tour we did with them. Just how nice they were and welcoming when we first came in, wanting to meet us all right away and hang out. They gave us bottles of champagne, we just immediately clicked.

Them [All Time Low] being so welcoming and normal and appreciative… that’s what’s inspiring to me.

When you know that a band like that have been doing it for 14 years, to see them still that excited about young bands coming up and they want us to be there… Them being so welcoming and normal and appreciative, and us giving it right back and letting them know how appreciative we are of the opportunity it’s like… that’s what’s inspiring to me. Things like that make me want to get to a level like that, and be that same kind of person.

What have you been listening to lately?

I listen to everything. I’m the guy that goes on Spotify every Friday into the new releases section and the New Music Friday playlist, so I’m always trying to see what the newest best sounding album is. Last Friday was a really good one, we had Ed Sheeran come out, so I’ve been listening to that a lot. I like a lot of hip-hop and R&B. I like that guy Post Malone right now; I think he’s really good.

This country-pop girl Maren Morris we’re really into right now too. She won a bunch of Grammys recently and it wasn’t expected, but it was well deserved because she’s this really young, really talented songwriter. On the indie pop-rock spectrum; I really like this band called Bad Suns right now, I think they’re awesome as well. I think they’re really going to blow up soon.

I’m the guy that goes on Spotify every Friday into the new releases section and the New Music Friday playlist.. 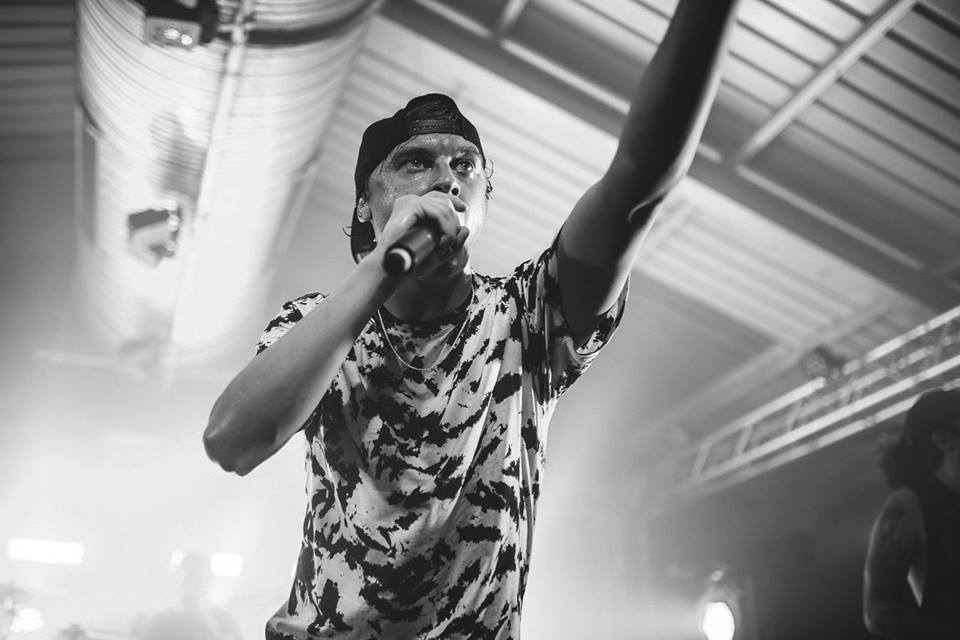 You’ve mentioned previously that you wrote ‘All Or Nothing’ on a rooftop in Japan. Do you have a specific place where you go to write, on tour or at home?

It’s weird, when I’m home I get nervous. I’m walking around the house into all the different rooms. I’ll blast a riff or a demo that we have that I’m trying to write lyrics to, and I have to walk around my whole house. I’m really weird. There isn’t one specific spot. You’d think I’d write in my room, in my bed, but no, that’s where I play video games and do nothing, I don’t get that inspiration there. I have to walk around and find the vibe somewhere. It sounds very spiritual, but it’s not, it’s just me being a dweeb.

It sounds very spiritual, but it’s not, it’s just me being a dweeb. 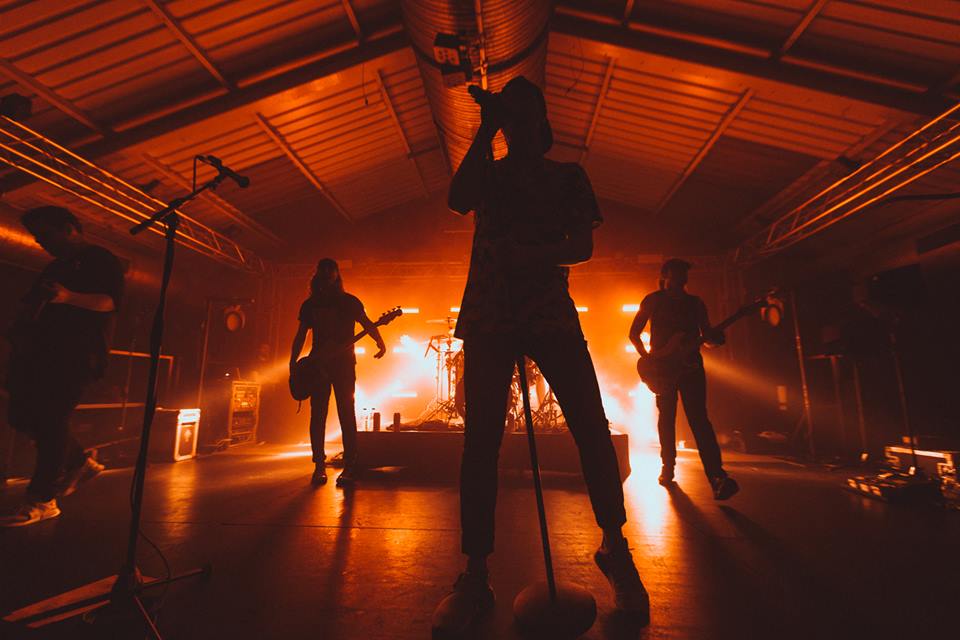 What have you been doing other than touring since the release of Around The World and Back?

We’ve already started writing some new music, which is pretty cool. We’re at the end of this album cycle now, it’s time to start thinking about what’s next for State Champs and what the new music is. We’ve already started writing, demoing and collaborating with people that we’ve been wanting to work with for a long time. New producers, engineers, songwriters even to collar with.

Friends and bands alike have been helping us out a little bit, that’s a new thing for us. But at the same time we’ve been heavily touring so much that we’re so used to that as well, but soon enough it’s time to take a break from that and start working on the next album. Who knows what that’s gonna sound like yet.