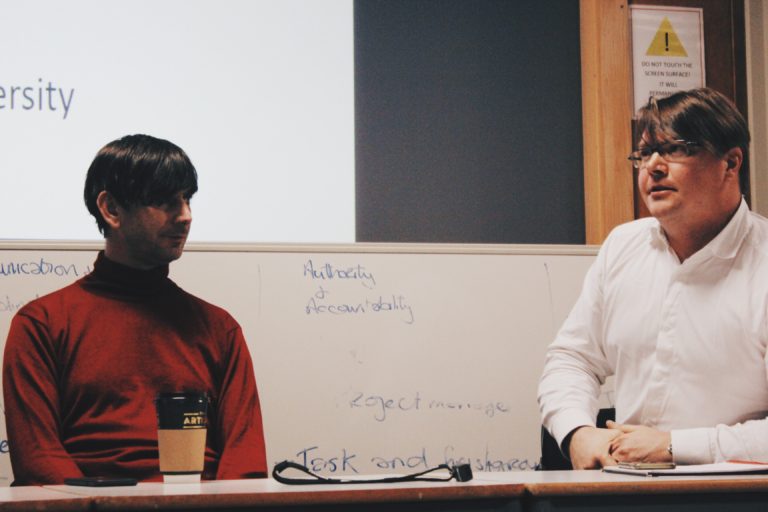 Live & Kicking is Southampton Solent University’s annual music industry conference. This year the topics revolved around radio, secondary ticketing and tour/production management. Here are the highlights of the third panel.

Life on the road: Working with touring artists

Did you know? When you’re touring with Leona Lewis you have to sign a contract that you’re going to be vegetarian for the duration of the tour even if you’re not.

Charlie got into touring before he went to University. Through some contacts, he was asked to go on a Phil Collins tour to drive advertising banners and whenever he had any free time, he offered his help to the sound and light crew. Francois got asked to help out at a venue, which led to doing front-of-house sound and eventually running a venue.

Francois, ’When you start out you have to do all of the jobs. Ironically, the more you do, the less you get paid.’

Charlie, ’It’s often about being in the right place at the right time, but there are things you can do to put yourself in the best positions.’

Both experts admit that at the beginning you’re not going to earn a lot but that’s a sacrifice you often have to make.

Francois, ’Every job you get is reputation. It takes time to prove yourself.’

One of the most important things both guys suggest is keeping on top of both the technical and the industry side of things. You’re often more wanted if you have multiple skills in various areas such as tour managing, sound, lights, rigging etc.

A typical day on tour is easier than the planning that goes into it. Most of the logistics and hard work is done before the tour starts, so the shows are the easy part. Though, both admit that, of course, depends on which artists you’re working for.

Charlie, ’It’s basically being an adult babysitter. You have to follow the schedule.’

Charlie and Francois have sometimes even needed to leave band members behind if they don’t make it in time. Francois, ’I’ve had to replace drummers in the middle of tours because they don’t behave and get behind schedules.’

On understanding the psychology of the individuals you’re working with, Francois says it’s essential for a tour manager. A good tour manager for one band wouldn’t necessarily be good for another because personalities can, and often do, clash. Charlie admits there’s a lot of personal attention involved when running a tour, ’You need to learn fast and know all the people and how they fit together. You have to learn to read them and make them trust you. It’s a skill that comes with experience.’ He also admits that sometimes making mistakes can be the best way to learn.

Francois agrees and admits that sometimes even friends can fall out on tour when they spend every hour of each day together in small spaces.

Tour planning includes, a lot of details, costing everything out, updating budgets, bookings hotels and flights, distributing money and keeping up to date with travel regulations (equipment, shipping etc).
Charlie, ’You’re going to spend your life in front of a spreadsheet and there’s a lot of thinking on your feet.’

Did you know that if your touring artist is ill, you need a doctor’s notice and when you cancel a show, the insurance doesn’t kick in before you actually load something into the venue. So you have to at least attempt to load equipment in to ensure insurance.

Talking about tour riders, Francois admits to sometimes including points just to make sure the riders have been read.

Francois, ’Temples request a Lego set at each show, which they put together and leave at the venue.’

Other unusual requests mentioned were Mariah Carey’s demand that each place on tour was supplied with puppies and Leona Lewis always taking her three dogs on tour with her.

Advice to those who want to get into touring..

Charlie’s advice is talking to as many people as you can, meeting management companies and getting some extra skills. Charlie, ’It’ll be your confidence that gets you the job.’

Francois, ’Be prepared to work for little money and sacrifices. It can be difficult to keep relationships with friends and family since the hours can be as long as 18-19h a day.’