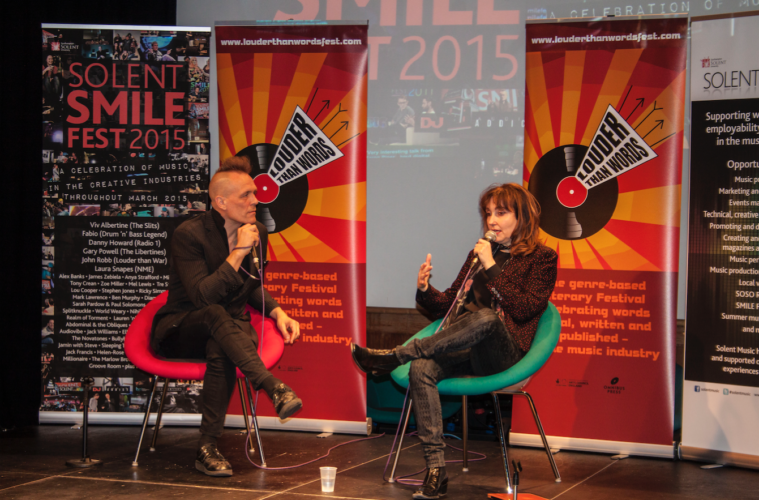 Wednesday 11th March saw the annual Music Industries Conference once again grace the Studio Solent stage with a fantastic array of guests amongst a variety of panels.

Kicking off the day was a look into the future of music with the ‘Digital Witness: The future of music’ panel with Anya Strafford (International Marketing Manager at Caroline International), Mike Smith (President of Music at Virgin EMI at Universal Music Group) and Tony Crean (Midnight to Six Management). A general consensus of the panel was that streaming is definitely the way the industry is going, but many of us still love the feeling of buying a physical product. The popularity of vinyl has also increased once again in today’s industry with many artists choosing to release this way.

A continuous debate in today’s society and media, next up was the Blurred Times: Music and Misogyny panel. A small insight into how women are treated currently in the music industry and how this has changed over recent years

featuring NME editor Laura Snapes, Tour Manager Tre Stead, Head of Press at Mute Records Zoe Miller, and Solent Alumni Mel Lewis Event Production at BBC Radio 1. With the shocking mock-up of the Reading and Leeds line up poster edited to show just the female acts or acts featuring women, this was a key point of discussion. Are there less women because they are women? Perhaps female acts lack the credibility that the male acts on the bill have? Or as Laura Snapes put it, maybe the female acts not included consider themselves too credible to be there? A discussion with many opinions and thoughts, this debate was sure to continue long after this panel was complete.

Our ‘In Conversation’ panel of the day featured Viv Albertine of The Slits interviewed by John Robb. A candid interview, Viv gave as a view of what to expect from her book (available here), which only enhanced the need to read it more! An honest and frank discussion on how life was for Viv throughout her time in The Slits to present day; it was inspirational with a focus on no matter how many times you get knocked down, the importance is in how many times you get back up.

Following this was the chance for some of our students showcase their own musical talents in the annual Solent Music’s 2015 A&R Showcase. The panel made up of Mike Diver (Vice Magazine), Alex Banks (producer), Lou Cooper (Toolroom

Records), Wayne Clark and Gary Powell (The Libertines) gave some great advice and criticism to the students who had submitted their tracks. Lucky acts included Basement 83, Brother Goose and Paige Mathis.

Completing our day, and the SMILEfest Music Industries Conference for 2015, was the Beyond EDM panel. Chaired by Carl Loben, the panel welcomed Danny Howard (BBC Radio 1), Fabio (Drum ‘n’ Bass legend), Mark Lawrence (CEO for the Association for Electronic Music) and Ricky Simmonds (Love & Other). The panel looked at the different kinds of electronic music and how this has become mainstream in today’s industry. With so many acts, Mark Lawrence said he was on the lookout for

something that scares him. When something scares him he knows that it’s good!

A huge thank you from us here at Solent Music and SMILEfest goes out to all our guests who visited and shared their insights with us. A great day was had by all and now… We look forward to 2016!