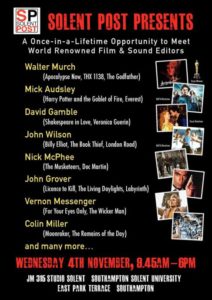 There’s an amazing line of guests over the course of the day, such as the world-renowned film & sound editor Walter Murch who was the first ‘sound designer’ to be credited as such (for the film Apocalypse Now), and is now one of the most important sound designers in Hollywood, plus many other major figures in UK and US Film and TV Editing including editors of James Bond 007 films.

It’s free for Southampton Solent University students to attend, and everyone is welcome.