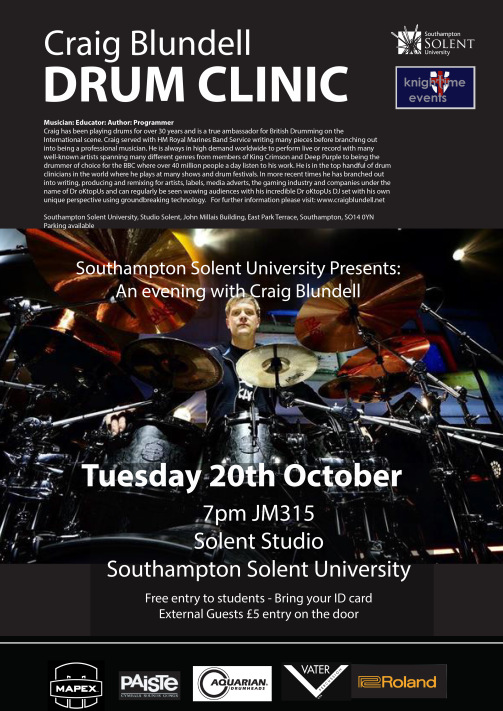 Craig has been playing drums for over 30 years and is a true ambassador for British Drumming on the International scene. Craig served with HM Royal Marines Band Service writing many pieces before branching out into being a professional musician.

He is always in high demand worldwide to perform live or record with many well-known artists spanning many different genres from members of King Crimson and Deep Purple to being the drummer of choice for the BBC where over 40 million people a day listen to his work.

He is in the top handful of drum clinicians in the world where he plays at many shows and drum festivals. In more recent times he has branched out into writing, producing and remixing for artists, labels, media adverts, the gaming industry and companies under the
name of Dr oKtopUs and can regularly be seen wowing audiences with his incredible Dr oKtopUs DJ set with his own unique perspective using groundbreaking technology.

Talking about the Steven Wilson tour, he said “Oh it’s a dream come true, by far the pinnacle and it’s what I’ve always wanted.”

From Internet videos to sell out nights at the Royal Albert Hall, Blundell has scaled the icy incline that is the current music industry, and when asked about  how he achieved it he stated: “Practice, be different, that’s all I can say. I did it every day and I still do”.

The drum clinic itself focused on independence of the limbs, use of technology in music and little elements that can be used in any player from beginners to professionals. Using an open Q&A session to further students’ understanding, areas such as performance anxiety and creating material for clinics were also discussed. “I don’t really plan ahead on what will be covered. I have a bank of around five hours worth of material and I just feed off of that for however long. But I still get nervous no matter when. I have a show in Israel next week and I have no idea how it’s going to go.”