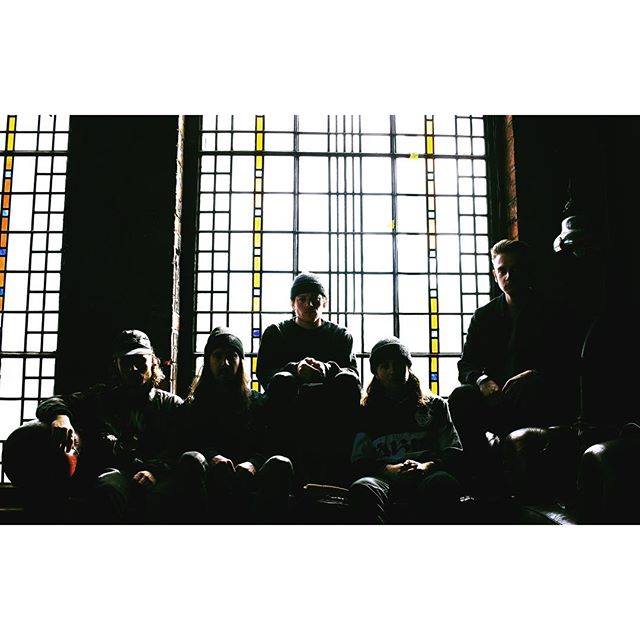 Interview with Shaun of Landscapes, ‘This is the come down, the low after the high.’

Interview with Shaun Milton of Landscapes by Maddy Howell

Maddy is on our BA (Hons) Popular Music Journalism course.

You recently finished touring the UK and Europe with Counterparts and Expire, what was the reception from the audience like at those shows?

It was a mixture of horseshoe crowds and avid followers really! Kids were either weirded out by us being on the bill with an up nosed attitude of “You’re not hardcore enough to be here” or we were adored for our diversity given to the overall show. It was a bit like being on a rollercoaster ride from start to finish if I’m honest.

It was a bit like being on a rollercoaster ride from start to finish if I’m honest.

What new bands have you been listening to on the road and would recommend?

I’ve been jamming this new band formed from members of The Carrier called Ultraviolet. We toured with The Carrier back in 2011 and still view that experience as our first greatest opportunity tour wise. I still look back at that tour with fond memories and to hear the same rage and angst in a new band from some of those guys is like a breath of fresh air to me.

Your sound requires a high level of vocal intensity on stage, how do you look after your voice on tour?

Thank you! It’s difficult for me because I have been through a lot with my voice and even now the measures I have to take to look after it are costly and not always effective. However, I had some saints reach out to me on this particular tour and I was able to get hold of some incredible tea by Dr Vox. A lot of the throat comfort teas out there have a really sickening taste to them especially after ritualistically drinking them for the last 7 years so trying the flavours that Dr Vox offers, enjoying them and them actually being effective has been an amazing help!

You released your second full-length, “Modern Earth”, early last year. How do you feel this album differs to your debut full-length, “Life Gone Wrong” in terms of its message?

Life Gone Wrong’s message was more, from a personal aspect, about fighting my way out of depression and finding a way to channel the disease of my own mind. Modern Earth is more about the connection and relation we all have to one and other and how we are so similar when we break down the walls we build around ourselves. I feel like Modern Earth was more orchestrated as opposed to a desperate scream for help.

I feel like Modern Earth was more orchestrated as opposed to a desperate scream for help.

You originally recorded “Modern Earth” in California at Panda Studios, but chose to take it back to The Ranch Production House in Southampton for more work. Why did you decide you needed to put more time into it?

Sam at Panda has a particular way of working which was alien to us at the time and when it came to leaving California we just felt like the album was incomplete so naturally we just felt like the best thing we could do was take it back to Neil Kennedy at The Ranch Production House to tweak. Once we were able to obtain the files some months into the following year, we actually finalised everything up within the space of a few days.

How does the writing process usually take place, does one person take the responsibility of the lyrics or is it a collaborative effort?

No, I write all lyrical content. During the final writing stages of Modern Earth, the last song of the album I worked on lyrically was Radiance which Martin helped me choose words to use and kept a driving force going in me whilst I put it together overnight. That was the first time anyone from the band had sat down and helped me with lyrics to be honest.
Usually, Kai would work out riffs and drum ideas and then we all contribute our opinions as the song starts to take shape. I feel like that way it’s a little more organic in the sense of lyrics and music becoming one.

If you could tour with any band in the world, regardless of whether they’re still active, who would it be?

Personally, it’s always going to be Tool. Each and everyone else in the band would have a different opinion on that, but that’s what makes us individual… right?

You recently announced a European tour with Hundredth, are you visiting any new cities that you’re particularly excited to play in or any that you’re looking forward to returning to?

We’ve been to every spot on the tour routing a bunch of times before so it’s nothing new, it’s just going to be fun hitting those places back up!

I’m always excited to return to Europe, wherever it may be. I have favourite spots but it’s more about being on the road in general. Meeting new people, seeing old friends. It’s always exhausting, especially as you get older, but it’s still worth it to me.

This is the come down, the low after the high.

Are you planning anything new for the Hundredth tour? What can fans who haven’t seen a Landscapes show before expect?

If I told you that then the element of surprise would be completely lost!

I guess for people who are new to the Landscapes world; This is the come down, the low after the high. It doesn’t get any easier out there so you may as well just go with it… Just don’t be afraid to lose yourselves sometimes.