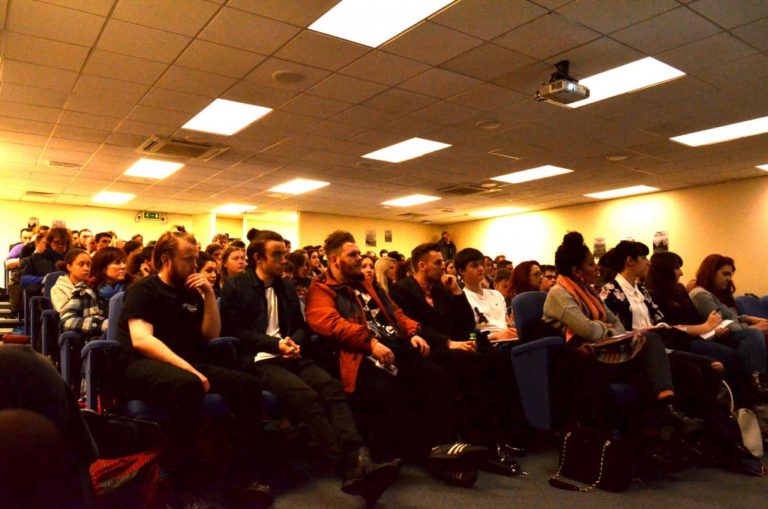 Staff and students take a peak into issues with live music

With final votes being cast ahead of The BRIT Awards on 25 February, Southampton Solent University has been taking a closer look at the live music industry. Welcoming an impressive panel of music industry professionals, staff, students and members of the public, the University hosted Live & Kicking, a conference exploring some of the issues surrounding live music.

Organiser Johnny Hopkins, Lecturer in Popular Music and Media Industries explained: “It was a really lively series of debates where guests and students got stuck in. Students are passionate about live music and many want to work in that field.”

Keynote speaker Alan McGee said that all the successes he has enjoyed can be attributed to experiencing live music. He started his own record label, Creation Records, using the proceeds of his live music club and then famously signed the Jesus & Mary Chain on the spot after hearing them play there. He also discovered Oasis by going along to a live gig in Glasgow.

Only last year McGee opened a new live music venue – an old derelict chapel that has now become an intimate performance space accommodating audiences of up to 100 people at any one time. Here he hopes to find his next star.

Jazg Kooner, club DJ, remixer and producer, discussed the economics of the industry and there was a general consensus that the way it is currently set up is starting to reflect the disparity between the very rich and successful that can fill massive arenas, and everyone else.

There was also a chance for the students to meet the panel one-to-one and make really important contacts. They had the opportunity to ask questions and got some great insights on how to get jobs in the industry.

“The students were really buzzing about the conference” Johnny said. “They got some hugely valuable advice from industry experts and raised their own concerns, such as the price of tickets for gigs and festivals.

“The feedback from the students has been fantastic. For example Charles Carmichael was engaged by “the honest opinions”, Sammy Kettell found it “interesting to hear all the diverse views” and Jasmine Booth valued “the insightful advice about our futures”.

Conclusions drawn from the event highlighted the importance of small venues to the industry, so new bands have a space in which to learn their craft and build a following. Fortunately for Solent students, there are plenty to choose from in Southampton, and who knows, perhaps they will spot the next big thing to hit the music scene.