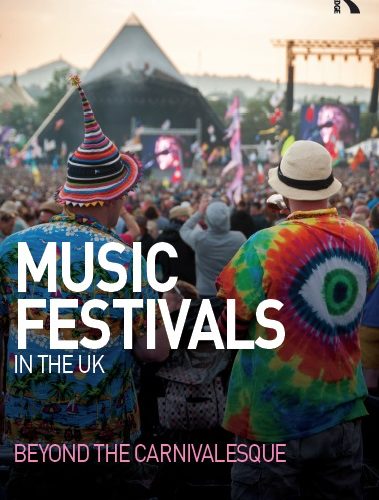 The outdoor music festival market has developed and commercialised significantly since the mid-1990s and is now a mainstream part of the British summertime leisure experience. The overall number of outdoor music festivals staged in the UK doubled between 2005 and 2011 to reach a peak of over 500 events. UK Music (2016) estimates that the sector attracts over 3.7 million attendances each year, and that music tourism as a whole sustains nearly 40,000 full time jobs.

Music Festivals in the UK is the first extended investigation into this commercialised rock and pop festival sector and examines events of all sizes: from mega-events such as Glastonbury Festival, V Festival and the Reading and Leeds Festivals to ‘boutique’ events with maximum attendances as small as 250. In the past, research into festivals has typically focused either on their carnivalesque heritage or on developing managerial tools for the field of Events Management. Anderton moves beyond such perspectives to propose new ways of understanding and theorising the cultural, social and geographic importance of outdoor music festivals.

He argues that changes in the sector since the mid-1990s – such as professionalisation, corporatisation, mediatisation, regulatory control, and sponsorship/branding – should not necessarily be regarded as a process of transgressive ‘alternative culture’ being co-opted by commercial concerns; instead, such changes represent a reconfiguration of the sector in line with changes in society, and a broadening of the forms and meanings that may be associated with outdoor music events.

You can learn more about the book at the publisher’s website, where you can also purchase it in either hardback or as an e-book.