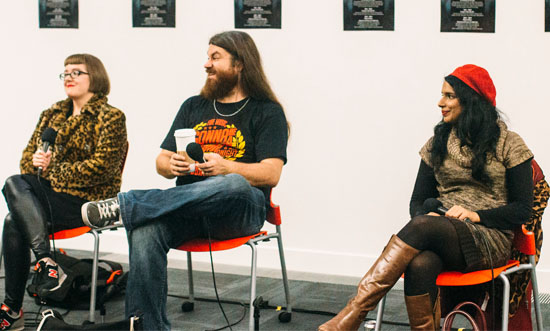 Ever wondered what students on our music courses get up to? Take a look at our 2016 round-up, which was an eventful year, seeing the continuation of our popular annual conferences and festivals, attracting big name bands and key figures in the industry. We’ve also seen our students seize fantastic opportunities in their chosen fields.

Live & Kicking, in its third annual conference, provided a platform for a series of lively debates on the latest hot topics in the field of live music and boasted a panel of the likes of Mel Archer, Production and Event Manager (Bestival, Glastonbury), and Sophie Williams, music PR and band manager of The Charlatans.

Both SMILEfest and Word Up! made their return for 2016, bringing a plethora of student-run concerts and conferences. SMILEfest saw a special talk from Glen Matlock (Sex Pistols) as well as James McMahon (Kerrang! editor) in conversation with: Will from Creeper & Davyd from Bury Tomorrow. Not forgetting the stunning performance and workshop with electronic music pioneer Richard Barbieri (Japan, Porcupine Tree). Word Up! boasted another heavyweight line-up of guests with the likes of Dom Lawson (Metal Hammer) and Sam Wolfson (VICE).

The University sponsored the inaugural Bandstand Live! event at Palmerston Park which attracted over 3,000 people. Solent’s student-run retail store Re:So set up their stalls and our students got hands-on experience by helping run the event, which was headlined by The Novatones.

In the summer, 14 BA (Hons) Popular Music Performance students were given the opportunity to hit the right note at the world famous Abbey Road Studios for the sixth time, recording their own track entitled In Flames. They recorded in the celebrated Studio 2, which has also played host to musical icons including The Beatles, Pink Floyd and Kate Bush.

The opportunity to vote at BRIT Awards 2017 has come about thanks to Southampton Solent University’s new Music Academic Partnership with UK Music, and we are one of only a small handful of universities able to offer this unique experience to students.

Jo Howarth from BA (Hons) Music Management was one of the students chosen to vote. “There are only 1,000 people on the panel, and they’re all industry professionals from all walks of life and areas of the industry, so it was such an honour to be asked, “Jo said.