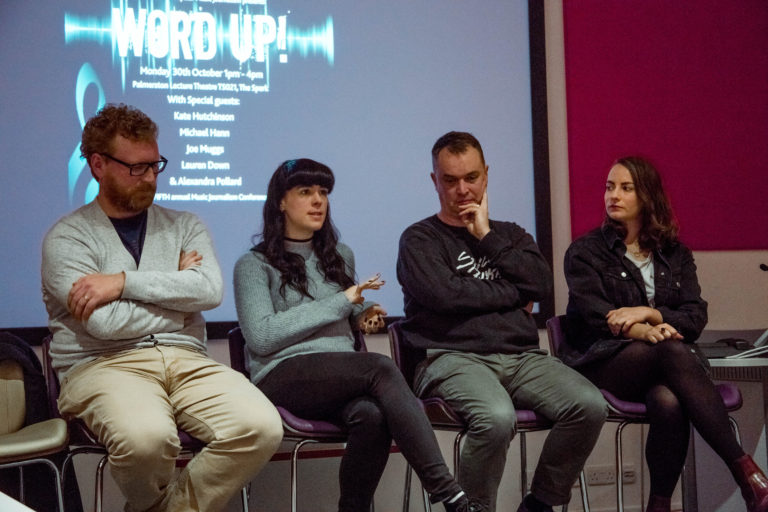 When Halloween time strikes around the halls of Solent University, the fright of lectures and deadlines get pushed to one side as the annual Word Up! conference made its return for the fifth year running. The event was organised and managed by the Popular Music media team, with the support of students on the courses. Fiona Sturges, organiser and Solent lecturer stated:

“As a lecturer and a working journalist, I always share my own experience with students, but it’s important that they get to hear about other people’s routes into the industry and get further insight about how they can get their careers off the ground”.

Louise Morrell, lecturer and organiser continued, “It is also great when the guests reiterate what we teach to the students. As long as our students enjoy Word Up! we will continue to provide the service.”

The first hour of the conference kicked off with Kate Hutchinson (Worldwide Fm, The Observer, Mixmag, iD) giving her top tips in making it in the freelancing world.

With her hilarious style making each point memorable, the attention is brought to her website where all her journalism guidelines can be found. Certain pointers include, “read as much as you possibly can”, “be enthusiastic because enthusiastic people get their sh*t” along with the final advice of “don’t be a knob-end”.

Her insightful and experienced vision to the freelancing world made for an impact-full hour, giving students the advice they will so desperately need to make a career out of journalism.

“In the age of Spotify, the journalist’s authority is diminished”

The final hour of the conference saw experts, Michael Hann (Guardian, FT, The Quietus), Joe Muggs (Mixmag, Bandcamp Daily, Wire MOJO), Lauren Down (Deputy Editor,Line of Best Fit) and Alexandra Pollard (iD, Noisey, Dazed, Fader) discussing the ‘Reality of Reviewing’. One aspect a journalist is always questioned on is ‘what gives them the right to review’. What gives them the authority to decide what’s good and what’s not? Our experts shared some of their experiences in relation to this question and some of their advice.

Hann stated, “In the age of Spotify, the journalist’s authority is diminished. You’ve got to know a lot as there is always someone in the comments section who knows more than you”. He then continued to put it in perspective and say, “The authority we have is that we listen to a lot of music and are aware of contexts”.

The panel ended the hour by divulging into the argument that album reviews are dated and their approach to writing one. Down explained that reviews today are more about the entertainment factor and giving information after Hann had pointed out album reviews are the least viewed posts for most publications.

Muggs then hilariously admitted he works from a shed in his garden when writing his reviews before the reality of a journalist was truly revealed to the audience. The reality is, Muggs will get an album then get stoned and go for a run. By the time he gets back, “the review has written itself”. So, despite the University not condoning the use of drugs, you heard it here first folks, journalism is all about getting stoned and going for a run.

Check out more from Jasmine Hodge