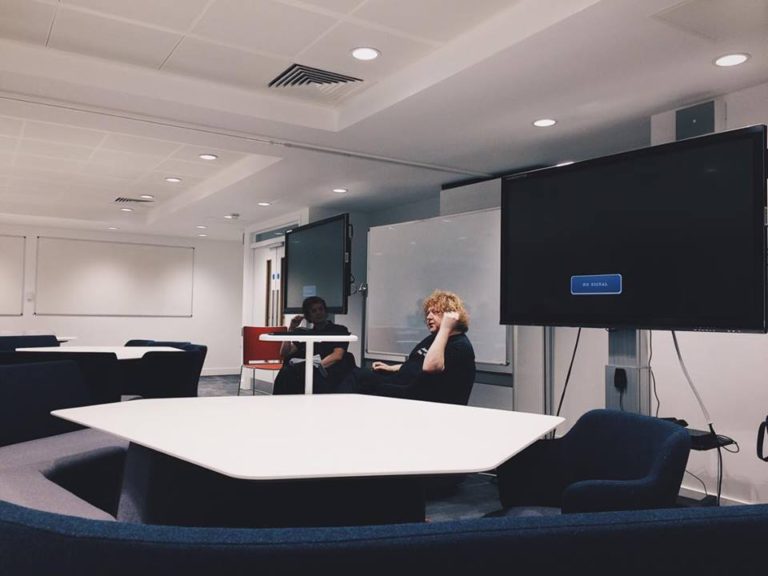 James Endeacott, ’Don’t take bulls**t from anyone in the industry.’

Another brilliant guest lecturer visited our music students part of their Freelancing and Professional Development unit – the music industry legend James Endeacott. James is an A&R person, manager and label boss. He’s the man who first signed The Libertines and he’s worked as an A&R with The Strokes, at Rough Trade Records and Columbia Records. Here’s a recap of the two-hour session with James.

James found his passion for music in secondary school. There was a guy walking towards him in white sneakers and he had these writings on his shoes. James asked what they were and it appears they were band names.

’I thought it was so cool. If someone was that passionate about bands, I had to find out what was behind it.’

He then got obsessed with music and started going to gigs. He was 13 years old when he went to a Stiff Little Fingers show. He was so fascinated by the gig that when everyone else went home, he thought there had to be more to the show, so he knocked on the closed door that led to backstage and asked to see the band. That evening was when he lost himself to music.

’I didn’t know what the business was, I just wanted to be in it.’

He worked in a record shop in Devon but soon moved to London to be a stand-up comedian. Fortunately, at a gig in London he met a guy from the record shop who introduced him to a band. That’s when he realised this was the company he belonged in. Even though James had never picked up a guitar, the band insisted he became their guitarist because of his music passion. So he just did it. He learned the three chords. ’I felt I’d found my calling and it was music.’

’I moved to London to be a stand-up comedian.’

Being in a band helped him learn about the business. After leaving his guitarist career (and turning down joining Jesus and Mary Chain), he went to packing records in a warehouse, which taught him about music distribution. Soon after he got offered a job in Rough Trade Records and a guy who worked in their music shop asked James to be their manager. Again, James has no idea what a manager did but his passion led him. He managed Tindersticks and toured with Nick Cave and the Seeds.

’Nick Cave’s manager helped me a lot and gave me advice. My belief got me through all situations.’

’There’s no right or wrong in music’

After splitting with Tindersticks, James went to do A&R at Rough Trade Records and that’s where all of his knowledge came together – the experience in being a band, manager, working in record shops and warehouses. James’s most impressive A&R’ing was working with The Strokes and The Libertines.

’The years working with them [The Libertines] were probably the greatest and most mental years of my life.’

James left an impressive mark on the industry and got offered a job at Columbia Records. The deal involved a great amount of money to set up his own record label under Columbia – 1965 Records was born. Although the label was pulled due to finances, he was offered an A&R position at Columbia. The label is now up an running again.

Fun fact: James found a band with a girl with a voice of an angel and brilliant music. When James took the songs to an A&R meeting at Columbia, the first thing that was asked, was ’What does she look like?’ And since the girl didn’t fit the major label’s mould, they didn’t want to work with them. That band was Alabama Shakes.

’A&R  is never being 100% happy with something. It’s always pushing for the next best thing. Never sitting back and relaxing.’

James ended the session with the best advice,

’Don’t take any bullshit from anyone in the industry.’