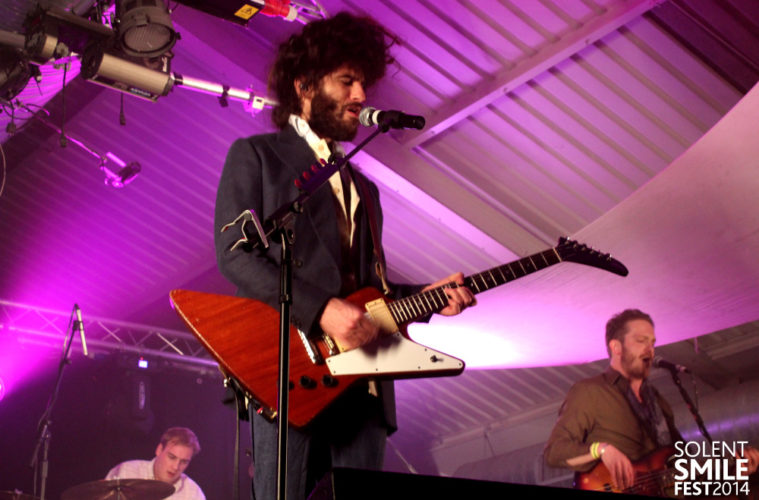 One of the final shows of this year’s SMILEfest (and the biggest) happened on Friday, and there was a lot of excitement surrounding headliner, King Charles.

Starting off the night was local indie rock act Brother Goose who charmed the socks off of the audience with songs from their EP, Throwing Shapes. One stand out song was their cover of Tears For Fears “Everybody Wants to Rule the World” – this eighties hit may have blown over the heads of the primarily young crowd but it still won them over and added an eighties punch to the night. Their whole set in fact sounded like it could be on the soundtrack to Back to the Future with the adding of a keyboard/synth player to the band set them apart from others, (luckily they didn’t go as far as a keytar) keeping their image cool; definitely a band to look out for.

Cavaliers kept the audience dancing with their up-beat indie-pop. With good looks and songs about Alan Partridge, they pleased the crowd with tracks from their debut EP out on April 16th. A highlight was song “Mumford” which had a great, catchy riff and induced an audience singalong with repeated lyrics “just won’t stop”, and I don’t think these lads will be stopping anytime soon! With summer vibes and riffs that echo Vampire Weekend, and much like The Kooks and The Klaxons latest comeback, they are surely going to take a big part in bringing back the sounds of 2008.

Main support, PELLA, were next to take to the stage bringing heavier and more technical guitar music with them. After two incredibly upbeat indie bands, these boys provided a break for the audience to chill out and prepare themselves for the headliner. Echoes and harmonies define this bands sound, making them a pleasure to listen to; these four boys once again thrusted charm upon the young ladies of the audience with a song about a girl – “LoveDrunk” – which had incredibly cute lyrics and a guitar effects that sounded romantic (and not in a corny Enrique way). Make sure to listen to their demo Luckdragon here: https://soundcloud.com/wearepella/pella-luckdragon-demo.

With the crowd well and truly warmed up, out came the incredibly talented King Charles and his band playing their first gig of the year for none other than SMILEfest! He burst onto the stage with 2012 single Mississippi Isabel providing a much fuller, heavier sound live than recorded, his plugged in folk still more than pleased his dedicated fans. “BAM BAM” and “Love Blood” were most definitely the biggest sing-alongs of the night, and got everybody – all the way to the back – dancing and bobbing their heads. He left the stage leaving the fans wanting more, so, naturally, the encore began. King Charles and his band came back onstage and treated us all with one more sing along – a 7minute modern day rendition of Billy Joel’s “We Didn’t Start The Fire” containing lyrics about Obama and David Beckham as opposed to Richard Nixon and Doris Day. With a style and sound that sits firmly between Darwin Deez and Hendrix, it’s safe to say that everyone, old and new fans, found a new King to follow on Friday.

Huge thank you to our SMILE partners Charlotte Phillips, Jamie Ford, Jack Jefferies, Advanced Promotions, and Mo’Club for putting on such a spectacular evening.