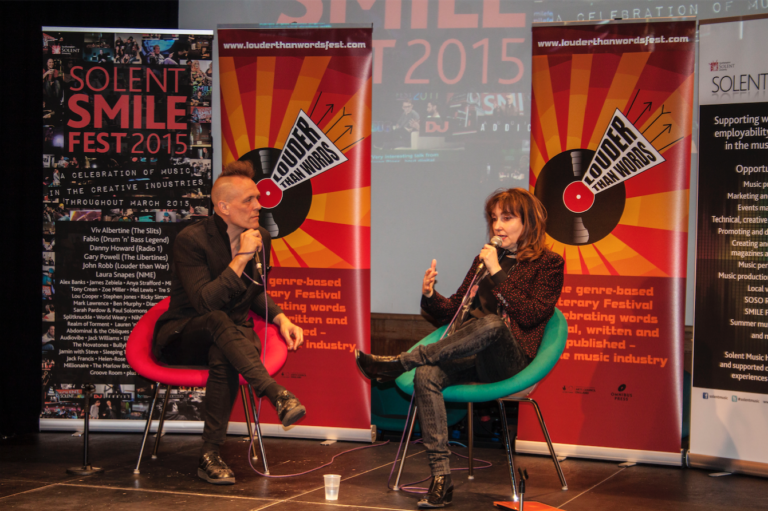 SMILEfest 2015: Interview with Viv Albertine from The Slits

Viv Abertine: It was through John Robb and Gill from Louder Than War. They’ve got a great website and they’ve supported me from quite early on. As I said, coming back in my 50s and saying, “look, I’m as valid as anyone of any age,” not many people took me seriously. But they did. John especially gave me my confidence in talking. Now I talk all the time, but when he started interviewing me a couple years ago, I didn’t. It’s funny that now I’m becoming part of the establishment which I hate. [laughs] I’m being asked to come and speak at universities and give lectures. It would’ve been hilarious when I was young, to think, when I was kicked out of my college or kicked out of Art school for being in a band and then I’m asked back to talk, as if I know what I’m on about, when really, I’ve just done a lot of mistakes, it’s quite funny. [laughs]

ZR: How often does that happen, how often do you get to speak to university students?

VA: A lot. I do a lot of fashion and a lot of music courses. I love it, actually, it’s so nice to see young people in front of me. I feel as relevant today. I mean, I think that everyone alive is relevant, but having a 16-year-old daughter, there’s something about talking to young people that I can’t quite put their finger on. I’ve had people come up to me and ask what I think about their generation and they’re almost embarrassed. I think that that’s such a shame. They feel they’re missing something, with all the gadgets they’ve got now. I don’t wanna take away from them the fact that they’ve missed something. Because there’s something very beautiful and mysterious about missing things.

VA:I hope not. It’s saying like saying does WWII exist now? It’s something that happened 35 years ago, it had a fabulous energy and I don’t know why people kept going on about it because you don’t want history to keep repeating itself. If we had punk happen now girls would have to be so oppressed in the west. We had to rebel against what was happening. You don’t have to rebel against the same things we had to rebel against. If punk happened again, it’d mean we’ve gone back to 35 years ago when girls never wore boys’ clothes or held an electric guitar. As a girl, you got laughed at if you went to a record company and you were like Jimmy Page or some amazing guitar player. People didn’t think that girls’ lyrics had anything to say.  We were trying to stamp a place for ourselves on the Earth. Hopefully in the west it’s not that bad. There were no music or film courses, even being interested in popular culture was considered pathetic and stupid. Go away and die, you’re no use to the planet. In that environment, we had to rebel and make a big fat noise. For punk to happen again, the whole world would have to close down. You don’t want that again. Now, a girl can set up her own record label, a girl can be a producer or a girl can learn how to use mixing decks without being laughed at or ignored. You could sit in a room and have the same sort of eye contact as the men in the room in a discussion. None of that happened then. You don’t want punk to happen again. For something that aggressive to happen again, that means that you’re battling a very, very repressed society.  I think there are different subtler ways to rebel now.

“If punk happened again, it’d mean we’ve gone back to 35 years ago when girls never wore boys’ clothes or held an electric guitar”

ZR: What would those be?

VA: Back when I was your age, I had three options. I could be a female police officer, a female primary school teacher or marry someone with decent prospects. Nowadays, you can be a female human rights lawyer, you can be an activist, you can start a pop-up shop or a record label, and you could travel and write a cool book about it. There were none of those possibilities in front of me as an ordinary working class girl back then. I think that with all those choices, I might not be in a band now. If I was young now, I think I might train to be human rights lawyer.  Or I might wanna be an architect. It would’ve never crossed my mind to be that bold and brave. Only middle class men were architects back then. There were a couple of British artists back then, like Bridget Riley, and Yoko Ono, but they were so extraordinary and so far away… For me, to meet Vivienne Westwood was amazing. To meet a female who was creating and working class and near my age, that was revolutionary. Patti Smith on the front of ‘Horses’ looked a bit boyish. And I felt a bit boyish, so I thought, “look, there’s a girl who shows her boyishness on the outside, that’s great!” That’s why I’m saying, I wouldn’t want punk to happen again, because society would have to be so narrow to provoke that kind of reaction. There’s so many choices nowadays, that’s so great!

ZR: What’s the best professional advice you ever got, either from your peers or record labels?

VA: I wasn’t ever considered a professional. I was never given any advice when I was in a band. When I was young and in a band and the people ahead of me, like DJ’s and record labels tried to stop us so we didn’t get any advice from them. From my contemporaries, all I can say is, we all did it to each other, we all criticised each other, all the time. Maybe that was the best thing to happen, because we respected each other and we had no one else to look up to. Johnny Rotten, or Sid Vicious, or Mick Jones, or me, or Poly Styrene, or Siouxsie Sioux, we’d all say to each other, “why are you doing that,” “why don’t you make that better,” or “why are you singing in this accent, surely your accent sounds more like this”. It made us think so hard about what we were doing, that instead of saying, “boohoo, I’m being criticised,” it inspired us to get better. That’s why we’ve made work that’s resonated for 40 years. People nowadays are treating music like a business and are all like, “darling, that was wonderful, and I can’t put down that band, because I might bump into them at a festival next week”, they’re all so polite to each other and up each other’s a**es that no one is actually giving each other a hard time and making them be better!

ZR: What advice can you give to students who are now starting out in the music industry?

VA: What I said in my talk, my advice would be that you just keep getting up every time you get knocked down. If you find an avenue blocked, and you’ve tried and tried and tried to make that work, shift your view to another avenue and go down that one. You just must never give up and you must think long-term and by that I mean the next 50 or 60 years. Don’t just think that you have to make it by 29 and you’re a complete failure if you don’t – no! Your time may come much later than that.

ZR: What do you think of the hipster culture? Are they modern-day punks?

VA: [laughs] No, they’re not modern-day punks, but I think they look great. I live in a very hipster area in Hackney and people say that it’s ruined, but y’know, it’s much safer to walk around at night and all the girls wear flat shoes. I think that that’s pretty cool. They’re not all tottering around in stilettos. They’ve got great coffee and lots of young people are starting pop-up coffee shops or vintage laundrettes and I think it’s great and enterprising. Let’s see where it goes.

ZR: Finally, you said that punk is about deconstructing, rather than building up legends. Don’t you think that that’s ironically what happened to the Sex Pistols?

VA: It is, ironically what happened to the Pistols and the Slits – we’re now legends. I think that’s lazy language and we would not have tolerated that language in punk times. We didn’t have heroes. The whole point of it was to say, “Look, you can do this too”! Instead of coming and watch us play, go and start your own band in your city and do it there. That’s much more revolutionary than wanting to stand on stage and be looked at and people will come and buy your records. I don’t come from that culture. I come from a culture that believes that no one is more special than anyone else. I totally believe that and I wrote that book to show how bloody ordinary I am and how you can still achieve things, no matter how hard your start is and how ordinary you are. In fact, you can make that your strength.