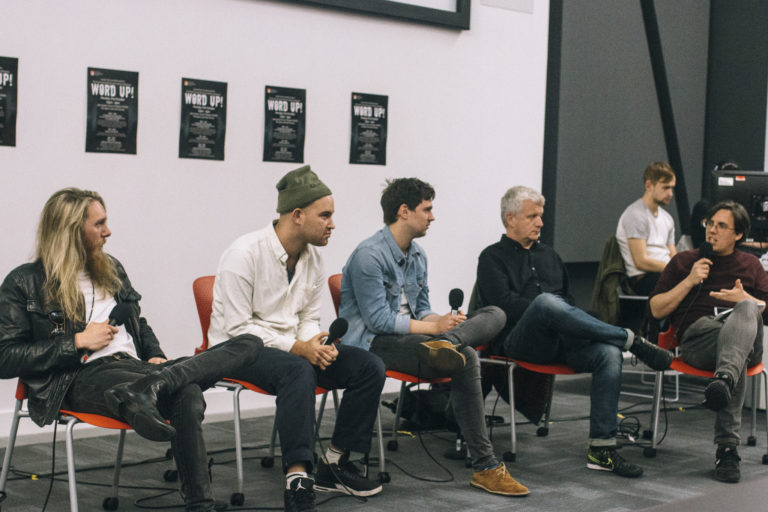 This Halloween saw the arrival of Southampton Solent’s fourth annual WordUp! Conference, curated as always by Fiona Sturges. This year the students were treated to three separate topics of discussion from a wide array of experienced music journalists and writers.

The first panel, entitled “A Freelancer’s Survival Guide”, was a chance for Dom Lawson, Anita Sethi and Charlotte Richardson Andrews to shed light on the turbulent life of a freelance journalist. Lawson, Editor-At-Large for Metal Hammer magazine, summed up his experience by saying: “It’s been really up and down for me for 18 years.”

This sentiment was echoed by the panel. Andrews – a journalist with too many credits to mention – described the atmosphere as “feast or famine”, but was insistently positive about the advantages of working for oneself. Anita Sethi, writer for The Guardian and frequent radio guest for the BBC, dropped the biggest piece of advice of the whole session:

“Lonely freelance journalists should get a cat.”

The consensus from this panel was that in times of self doubt, pitch harder, follow your passions and ride out the wave.

The second session was an insight into a day in the life of Zöe Howe, prolific journalist and author of books about Stevie Nicks, Lee Brilleaux and The Jesus and Mary Chain. Zöe has also just published her first venture into fiction: Shine On, Marquee Moon.

This hour long talk from a young yet experienced female writer was a perspective on the industry that many of the students in the audience may not have heard. Howe was funny, engaging and full of wisdom. Her advice centred on staying true to one’s passions and generally being nice to those you work with:

“Make a cup of tea for someone every now and again, but on the other hand, don’t let yourself be exploited or disrespected.”