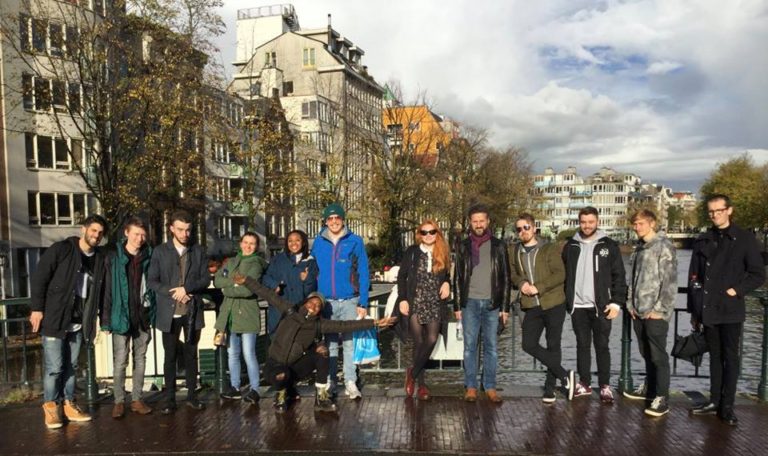 As part of Solent’s first International Enrichment Week, students and staff from across the School of Media Arts and Technology packed their bags for a six day trip to Holland. Students spent time in both Amsterdam and Utrecht, making the most of the time away by taking part in a range of events, performances and projects.

The first stop was the Amsterdam Conservatorium, where students were given the opportunity to take part in a speed networking event before being invited to join jam sessions with students from our BA (Hons) Popular Music Performance programme.

Students also made the trip to HKU University of the Arts, Utrecht. Here, they attended a music business modelling lecture hosted by Arthur van de Graaf, co founder of crowdfunding platform Get a Crowd and active consultant for many innovative social projects throughout Holland.

Back in Amsterdam, the Studio for Electro-Instrumental Music (STEIM) invited students to tour its facilities and attend a seminar with senior researcher Kristina Andersen. Kristina spoke in depth about the vast expanse of experimental / electronic music and its relevance in today’s musical world.

The students were also given the opportunity to perform at three live music venues across Amsterdam: The Waterhole, CC’s Muzikkafe and Bourbon Street. Solent’s own SVGA, Sammy Kettel and Courtney Gray performed energetic sets at each venue.

The group also made time to see BA (Hons) Popular Music Performance alumni Samm Henshaw and Stefan Adamson perform a sold out show at the Bitterzoet. Students caught up with Samm after the show, chatting about his experience of the industry and his recent performance on Later… with Jools Holland.