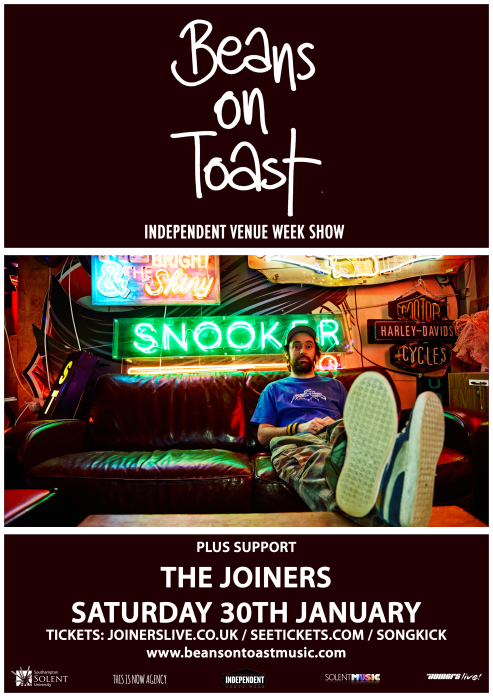 Beans on Toast at The Joiners

Solent Music is joining forces with Southampton’s The Joiners (named Britain’s Best Small Venue by the NME in 2013) to support the 3rd annual Independent Venue Week.

Beans on Toast will be playing on Saturday 30th January as a special one-off show for Solent Music and IVW, which will be his first UK gig of 2016.

Beans on Toast (aka Jay McAllister) spent the late summer touring the US in support of Frank Turner, and released his seventh album Running Up The Hill (Xtra Mile Recordings) on his birthday, 1st December, before embarking on a UK tour.

He isn’t just your average folk singer songwriter. He’s a modern one-man band, taking charge of all aspects of his music career whether it be writing, recording and playing his music, taking his own press shots or shooting his own promos. He is a true DIY artist with true DIY ideals, and a perfect choice for Independent Venue Week.

Independent Venue Week is a 7 day celebration of small music venues around the UK and a nod to the people that own, run and work in them, week in, week out.

These venues give artists their first experience of playing live in front of an audience and for fans, somewhere to get up close to artists that one day, may well be playing stadiums and festival main stages.

Supported using public funding by Arts Council England, Independent Venue Week brings together these venues along with breaking and established artists, promoters, labels, media, bloggers and tastemakers to create a nationwide series of gigs at the end of January.

These venues are the backbone of the live music scene in this country and Independent Venue Week wants to recognise all that they have done to create some of the most memorable nights of the past so they can continue to do the same in the future.