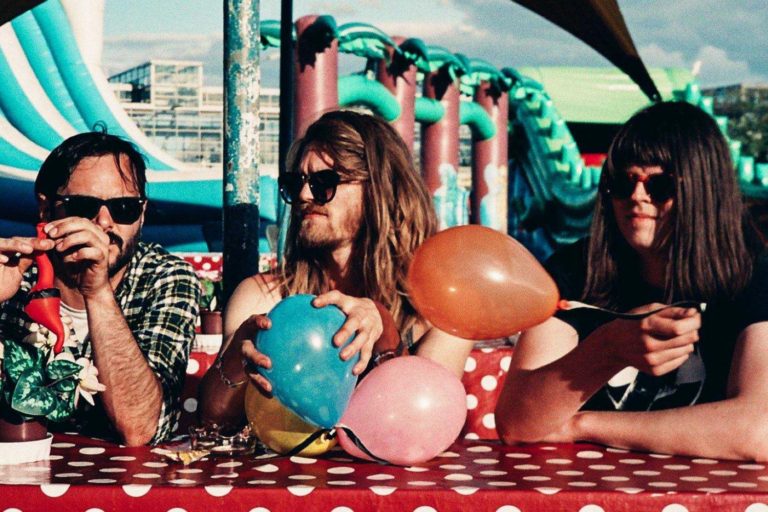 Interview with Tigercub, “It is cliché but it is so spinal tap being in a rock band that’s on tour!”

After a monumental year of relentless touring and releasing their debut album, Brighton trio TIGERCUB are back on the road again. Halfway through their immense European tour, we caught up with the band for a chat about politics, touring and moving in a digital direction.

It’s the last date of their 2016 UK headline tour, and with their sound check over, Tigercub bassist Jimi Wheelwright and I are sat drinking herbal teas, waiting to be joined by drummer James Allix and Jamie Hall, the vocalist, guitarist and, as I discover, incredibly tall front man.

After spending some time pondering the phrase ‘I’m thinking of training to become a dinner service’, that was printed on the mug Jimi was drinking from, I can’t help but enquire about Buffalo St Helens, Mr President and Wingnut Stick III, who were introduced in the video for ‘Antiseptic’, a single from the bands 2015 EP Repressed Semantics. In the video for their single, for one night (or day) only they became Buffalo St Helens, Mr President and Wingnut Stick III. Shot by a “very eccentric, very sexually ambiguous Italian man” (whose name I didn’t quite catch), the band blame their chosen nicknames on “lots of red wine” the night before.

“We figured quite early on that if you don’t mind not looking cool for a bit, you can be quite interesting”, says Buffalo (Jimi). And complete with sequined jumpsuits, drumming on banana peels, half a shell suit and “a weird Britpop guitar president”, interesting is just one of the many disparate adjectives that spring to mind when watching this video. Other Tigercub videos are not dissimilar. Quite opposed to taking themselves seriously with “all the stuff you have to do that isn’t necessarily to do with the music”, alphabet spaghetti faces and inflatable bouncy castle havens have also made appearances in their videos, alongside orally dissolving Beroccas and what looks like a cameo appearance of Ronald McDonald. But regardless of all the fun on screen, when it comes down to their art Tigercub are “very serious about making records.”

“We figured quite early on that if you don’t mind not looking cool for a bit, you can be quite interesting”

Having listened to their music, it would be hard to expect anything less – effortlessly slick, their songs are rich with subtle intricacies balanced with raw energy and intrapersonal musings so meticulously, that they couldn’t possibly be born out of half-heartedness. “[With videos] we felt most comfortable just being idiots and not making sense”, says Jamie. “As far as the actual content goes, we ain’t fucking around there you know, but sometimes the contrast is quite nice.”

Speaking about the complimentary contrast of their satirical imagery against their focused attitude towards making music, Jimi says “it’s like the left hook of a tongue in cheek and then an actual serious uppercut, and then people are like ‘woah, woah.’” And upon listening to them and seeing them play live, I am most certainly left woah-ing. Their music is intense and significant, and even scary, as sharp riffs and distorted bass meet with lyricism as hard-hitting as James’ drum patterns. Taking influence from genres like punk, grunge and hardcore who often embed their views and stance into the foundations of everything they put out, it comes as no surprise that Tigercub have ambition to propel a voice within their music, creating a communal refuge for like minded individuals who might feel unrepresented.

“I just think the current world climate we live in is so rich in subject matter”, says Jimi, placing his mug down carefully on the table between us. “And I just think it’s crazy if you’re a band not to tap into that in some way.” And with the prevalence of political and governmental commentary across all media platforms in 2017, overlooking, or taking no notice of current affairs is possibly even more of a task than speaking out about it.

“The feeling that you get from waking up after the election, or after the referendum, like that is a really creative, really motivating feeling to have”, says songwriter Jamie. “Our era now is a bit like the digital version of the ‘60s; no one knows what the fuck’s gonna happen next and there’s so many different revolutionary ideas, so many paradigm shifts and this awareness of the global world – it’s a massive, massive time of big change and revolution.”

And just like in the ‘60s, music can still be seen today as being a formidable tool in uniting and supporting people who might feel like the minority. Tigercub records are pensive and heavy with discontented grievances toward “the lunacy of what’s happening” in the world around us. But rather than simply spewing hate speech, through externalising their own feelings their music becomes a welcoming sanctuary, “a sort of refuge for people who think the same way” as we all mourn fast-fading ideologies of the pre-brexit, pre-trump world we took for granted.
“We’re just totally powerless”, says Jamie, “and, we’re not offering any solutions but at least we can agree that it all sucks together.” Far from offering the impossible, Tigercub simply at as mediating critics of the crises affecting our world today, offering comment and even clarity in a way that makes itself accessible and relatable to other members of what can sometimes feel like a decaying world.

But as politically driven as their music has been of present, it wasn’t a primary theme in the conception of Tigercub. “It’s more like a mutation that we’ve started to project our political ideas”, says Jamie, “it doesn’t drive it, but it’s like a side effect of it.” One thing that does drive their motivation though, is the one thing everyone in our generation wants to do; travel. “I wanted to be able to travel the world and be in a band doing this every night, and the band is like a vehicle for that”, says James as the band share some tour stories, one of which includes “a quadruple blood test in a police cell”…

“It’s like a gear for life experience” Jimi muses, “it is cliché but it is so spinal tap being in a rock band that’s on tour! But we can only do all that if we keep coming up with more content, and that is certainly a driving force.”

Fortunately enough for them, Tigercub seem to write music relentlessly, with less than a year between their latest EP and their debut 12-track album, Abstract Figures in the Dark. “I find writing is almost like meditation, this period of time where I can just sit down, write, and like 6 or 7 hours can go by and I wouldn’t have felt it” – and this state of mind certainly translates on record, with multiple songs laced with obscure and depthful introspection. On writing an album compared to writing an EP, Tigercub called it “nice, amazing fun, stressful, infuriating and brilliant” all at once. Having set the bar considerably high with ‘Repressed Semantics’, surpassing expectations with their first LP was always going to be challenging. As Jamie identifies, “we thought well, people are gonna review it, and if we don’t smash it, it’ll be really embarrassing for us”.

“..if we don’t smash it, it’ll be really embarrassing for us.”

Luckily though, possible embarrassment dodged, AFITD is a triumph for the band. Raw and unapologetic as ever, their debut LP also indulges in the more ambient, soft-natured undertones that were glimpsed at briefly in earlier songs like ‘The End’ and ‘Pictures of You’. But though just one of the many significant cogs responsible for making this album work with such vigour and sustainability, it is the hard-hitting subject matter that really grabs you by the ears and initiates a sensory firework display. Where Repressed Semantics simmered with political undertones, Tigercub’s debut album allows this theme to burn through the track listings, with barely a song left unscathed.

AFITD sees Jamie translate his views into a worldly commentary that is in parts bleaker, and more disparate than it’s predecessor, albeit wrapped up in flowering rhythms and tied with a melodious bow. Bridging gaps and toeing lines between ‘Migraine’’s jagged, claustrophobic grunge-punk, the soft fluidity of songs like ‘Up In Smoke’, and then ‘Black Tides’, with its politically charged, chant-like hopefulness show their skill and diversity as they continue to experiment with different sounds.

..it is the hard-hitting subject matter that really grabs you by the ears and initiates a sensory firework display.

“We’d have been dead in the water if we just made another rock album”, says Jamie. “[With this record] it really felt like we had to find out what it is that we are and what it is we want to be.” Speaking out about future plans, Jimi tells, “we have ideas for whatever we do next to be more in the world of the digital” (think modular synths and loops). “There’s a touch of it on the album, just really subtly though, to kind of lay the seeds so we can grow into that sound if we want to. There’s a couple of loose ends on the record we could follow down later.”

“We’d have been dead in the water if we just made another rock album”, says Jamie.

As James puts it, “you can’t take a complete left from ‘Repressed Semantics’”, and I’m glad they didn’t, as they delivered an incredible record full of songs that translate both live and on record. “I just think the best bands out there kill it live, and they kill it in the studio but in a different way”, says Jimi, whose section for each song is “never the same every time” – partly due to him not always remembering his part! “We didn’t play any of the album stuff [over summer] really except Omen, then it came to the tour and I was like fuck, what do I do!” Thankfully though, they don’t all go totally freestyle and it works, if they did “it would probably come apart at the seams, because by the time the bass is on the drums and guitar are in such an incredible place.”

Speaking with Tigercub somehow feels similar to listening to their music. They are relaxed but speak with intensity, soft humoured yet passionate and truly amazing to meet with. Their another headline tour took them travelling Europe until 24th February and supporting Pulled Apart By Horses in March 2017. Not to be missed, although be warned – for them, “live it’s too much fun to just make everything heavy.”