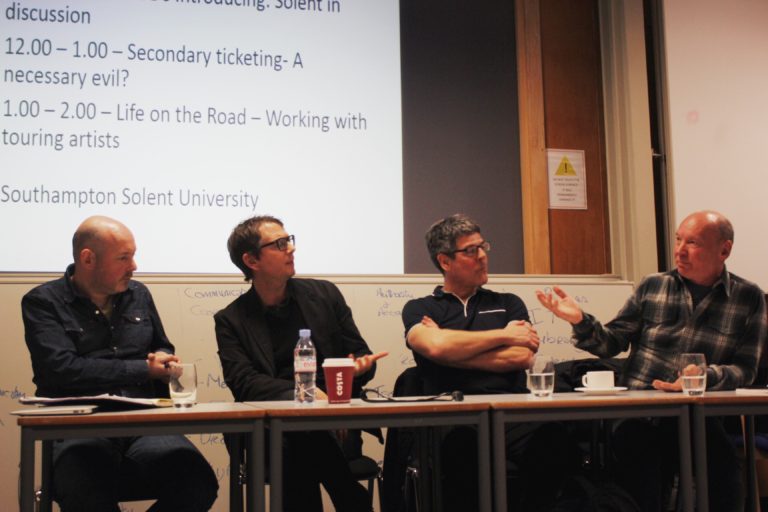 We’ve now got to a point where Adele’s tickets can be sold on secondary ticketing sites for £24.800 to give an extreme, yet accurate example of the situation. Adding fuel to the fire is the story of Royal Albert Hall being called a ‘national disgrace’ over members’ ticket resales (The Guardian).

Discussing how the ticketing industry has come to this, Marcus Russell strongly emphasised the power of the Internet.

’Everything’s changed because of it [the Internet]. It’s fantastic but the problem is that it’s being hijacked by pirates.’

He suggested that the the only way to resolve the current situation is through government regulations. Dave Newton, the CEO of WeGotTickets, backed this up and added that there’s no way to stop people from reselling tickets and that it’s all about managing the market.

The most relatable argument came from Marcus who noted the wider implications of secondary ticketing that concerns every single aspect of the live music industry. Paying for an expensive tickets means that the fans have used all of their money on that one night, which means they don’t have any disposable money left to see other smaller bands. People can’t afford to go to other shows and support smaller venues and artists.

’It’s sucking all the disposable money and essentially breaking the independent scenes, including bands, promotes, fans and venues.’

Marcus Russell also says that shows that have tickets on secondary sites can have up to 30% no-show rate when the normal is 8%. This happens when tickets have been bought in bulk and sold on secondary markets for an extremely high price that fans can’t afford. Situations like these aren’t rare and they kill the atmosphere of the event, affect drink sales, merchandise sales, the venue, the promoter, the fans and the artists – everyone involved.

Russell, ’Not all who buy tickets are crazy fans. Often you go to shows as a customer just to spend time with a friend or to have a night out. So if you spend all of your disposable money to see your favourite band whose ticket  you had to buy from a secondary ticketing site, you can’t afford to go out any more that month.’

‘..if you spend all of your disposable money to see your favourite band whose ticket  you had to buy from a secondary ticketing site, you can’t afford to go out any more that month.’

Although as Andrew Parsons (MD, Ticketmaster UK) notes, many artists have started to control where their tickets are being sold and he takes great courage from the fact, Russell backfires by stating,

’Wouldn’t the best way to control it, be that secondary sites didn’t sell the tickets over face value?’

The panel could’ve easily gone on for another hour after word was given to the audience who were extremely passionate about the issue. The conversation is still going and the live music industry is eagerly waiting for a change in ticketing policies.