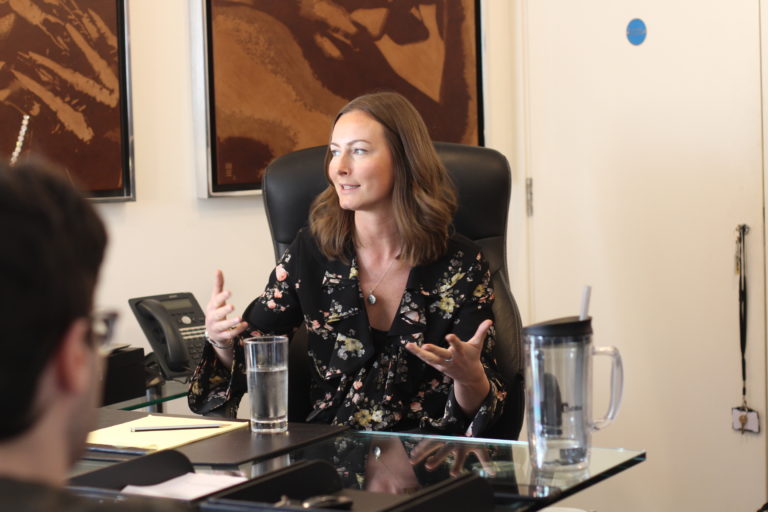 Colin Lester started the day by giving students tips on how to approach music in the global market and how to work with the different characteristics of those markets. He talked about the importance of gateways, meaning that if you break the US market, you get access to Japan; if you sell in the UK, you break Germany. In order to break different markets, you need to listen to music that sells in those countries and adapt yours accordingly.

Head of A&R Louis Bloom gave an insightful talk on how, although, the industry has changed for the better, it’s increasingly difficult for an A&R person to break acts. For example, when previously it could take two years, it now typically takes around four. Also, it can take around 6 months to break a single. At the moment, Louis signs acts who will break in 2020. He also emphasised the importance of finding a mentor in the industry who is willing to teach and support you. Louis admits he wasn’t ready when he got into A&R and it took him 7 years to get a hit, but it’s paid off.

Louis also discussed how the change in the industry is quite clear from the fact that Catfish and the Bottlemen sell out O2 arenas but haven’t made any profit from record sales.

Senior Booking Agent Gary Howard started his talk with a motto, “short-term gain, long-term pain.“ Gary walked the students through show budgets, deals, the relationships between agents, artists, managers and promoters, and discussed the criteria he takes into account acts before signing acts. Gary mostly signs pop artists that sell since it’s a business and he’s essentially a salesman, which means that the artists need to be marketable and have great songs.

Rak Sanghvi from Spirit Music Publishing spoke about publishing deals and the complex nature of that particular area of the industry. Rak chatted about his experience working with the young Jessie J and how he worked around her being only 19 years old and alone in a new country by putting her up with song writers, which resulted in her writing ‘Party in the USA’ for Miley Cyrus and ‘Price Tag’.

Ditto Music owner James Walsh discussed the ever-growing importance of streaming services and distribution deals. He admitted that, although streaming makes it easier for independent acts to get featured, it still isn’t lucrative – one million streams earn the artist around £5000. James and Ditto Music have helped a number of acts get started in the industry, including Stormzy. James got into the business by doing an internship in the US and afterwards joining a band of two brothers to set up Ditto Music that now has 8 offices all around the world.

Sony UK Insanity Records label manager Alice Beal then spoke about her journey into the industry, the importance of marketing, and the length of album campaigns that often start years before releases. Alice got into the music industry by doing a lot of work at different companies during University. She was picked up as regional A&R scout for Island Records and went on to work for the label after graduating. Alice then worked as a PA to Managing Director, in marketing at Ministry of Sound, and at Universal’s Polydor Records and Virgin Records where she worked with James Bay, Ella Eyre, and got her first number one single ‘Call Me Maybe’ by Carly Rae Jepsen.

Alice says her most significant input is working on James Bay’s debut album campaign that started 3 years before the release. She then moved to Sony where she is now the label manager of Insanity Records, working with Craig David among others.

Music Management student Connor Lebas added, “I thought the day was enjoyable and truly beneficial to all of us that went. I was really impressed with the level of professionals Colin was able to bring in to share with us their expertise, giving us great advice.“