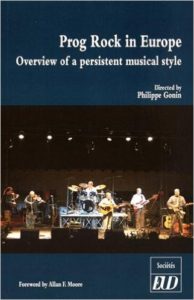 This book offers a wide-ranging collection of chapters about progressive rock, and represents the first flowering of a multi-national and multi-disciplinary organisation dedicted to examining this often maligned and misunderstood form of music. Progressive rock music first emerged in the 1960s and achieved its greatest commercial success during the 1970s, yet remains an important part of our global music industry. Recognising this, the Official Chart Company launched its Progressive Albums chart in 2015, with artists such as Tame Impala, Joe Satriani, Muse and Faith No More all appearing in its first Top 10 listing.

The stylistic diversity of contemporary progressive rock owes much to the development of bands in  1980s – whether as more chart orientated versions of older bands such as Yes and Genesis, or in the ‘progressive underground’ of bands centred around The Marquee in London (such as Marillion, Pallas and Twelth Night). This era is discussed by Dr Chris Anderton (Course Leader of BA Hons Music Promotion and BA Hons Music Management at Southampton Solent University) in this book, alongside contributions about progressive rock ‘behind the Iron Curtain’, and the differing experiences of progressive rock across continental Western Europe.

Find it on Amazon here.