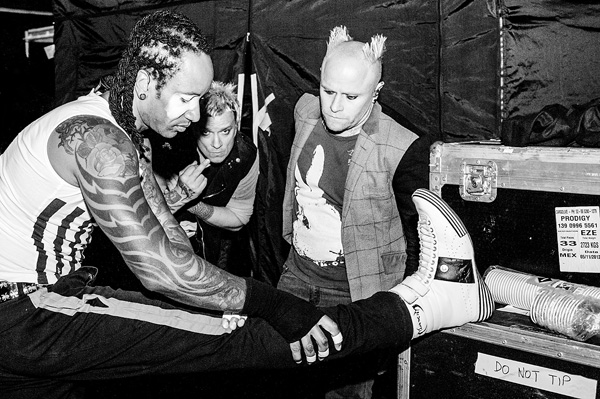 We Eat Rhythm is a prestige limited edition reworking of the acclaimed biography of The Prodigy. It features brand new and exclusive interviews, photos and illustrations and covers the period from the band’s emergence to the release of the highly controversial ‘Baby’s Got a Temper’. It will be followed in 2018 by the biography We Live for Beats that takes a close look at the Always Outnumbered Never Outgunned to The Day is My Enemy era.

I’ve known the band for over 20 years and have been the band’s official campaign biographer for the last five albums, including acclaimed studio sets Always Outnumbered Never Outgunned, Invaders Must Die and The Day is My Enemy. I also provided the album essay for the compilation Their Law.

We Eat Rhythm takes my previous book length biography of the band as a starting point and explores with greater depth information that has come to light in the intervening years. It will include previously unpublished interviews with Liam Howlett as well as numerous people involved with the band.

Finally published as I’d always intended We Eat Rhythm  is totally unofficial but written with full cooperation of the band and their management. It.will be the definitive version of my biography of The Prodigy.

FIND ON INDIEGOGO
We Eat Rhythm: The Prodigy story Part 1